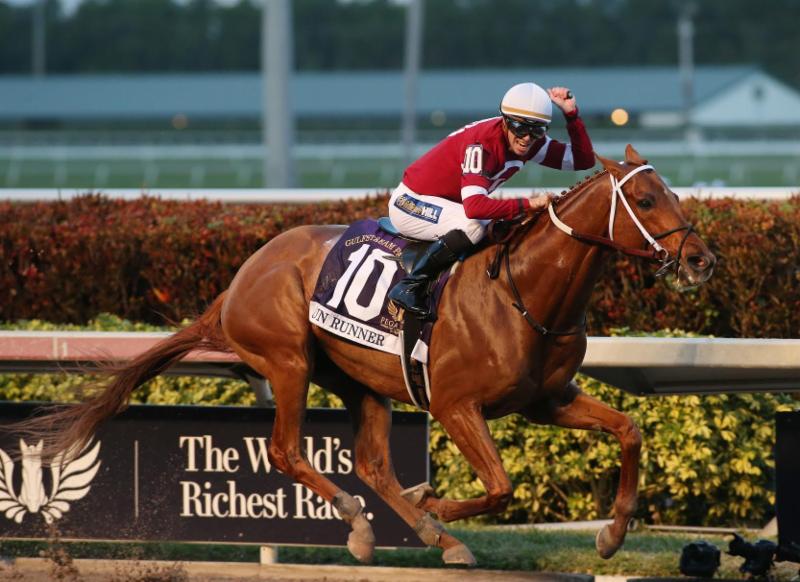 Hallandale, Fla. – Jan. 29, 2018 – The Pegasus World Cup Invitational, better known as the richest horse race in the world, took center stage in Miami, Fl. during the last weekend in January. With $16 million in available prize money, the race saw 12 of racing most competitive international contenders lay out their best performance in hopes of capturing the prestigious prize. American Equus Chosen Rider, Florent Geroux, piloted Horse of the Year, Gun Runner, to the finish line in what will be the stallions last race in an illustrious career.

Of the 12 horse and rider combinations, eight jockeys including those that secured first through fourth place victories were American Equus Chosen Riders. These jockeys are an exemplification of what it means to be a trailblazer in the sport of Thoroughbred racing including Pegasus World Cup Invitational winner, Florent Geroux. Geroux and fan-favorite Gun Runner have had a history of success in high-stakes races having won the 34th annual Breeder’s Cup Challenge in the final months of 2017. American Equus Chosen Rider, Javier Castellano, secured second place in the race aboard West Coast while Luis Saez and Tyler Gaffalione rounded out the top four positions on the leaderboard. All of American Equus’ participating riders were outfitted with their cutting edge Teardrop XL Racing Irons.

American Equus’ revolutionary irons are perfect for the high-risk sport of Thoroughbred racing. Each iron is built to endure and provide extreme lateral crush strength for ultimate jockey safety. They are crafted out of a solid, lightweight billet aluminum alloy and are coated with a hand polished finish to add a professional look to the products that are of unparalleled performance and design. The irons have steadily been gaining in popularity after their debut in 2016 and can now be found on racetracks across the U.S. and around the world.

Gun Runner and Florent Geroux break away from the pack. Photo: Adam Coglianese

“I want to extend our most profound congratulations to Florent Geroux and all of the riders that sported our racing irons in the Pegasus Invitational,” commented David Shano, founder of American Equus. “It is an honor to be a part of the success of our chosen riders and watching them win on the world stage is nothing short of exhilarating.”

American Equus is the premier manufacturer of elite irons, spurs, and bespoke horse shoes for Thoroughbred racing, show jumping, barrel racing and much more. The company, based in Gilbert, AZ, prides themselves on providing products that elegantly and effectively supports the results driven equestrian competitor, regardless of their discipline or skill level.

To learn more about American Equus and their competitive line of equestrian equipment visit www.americanequus.com.