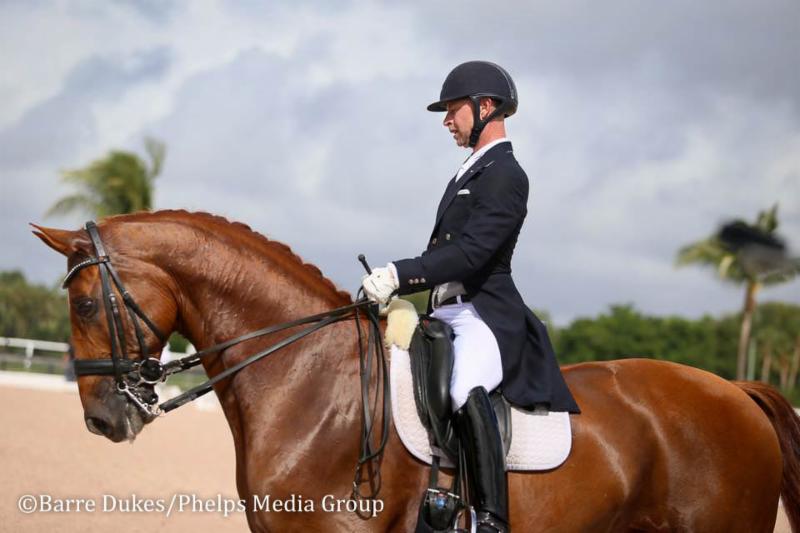 Wellington, Fla. – Dec. 15, 2017 – The team at Marcus Fyffe Dressage, led by Olympian David Marcus and Grand Prix rider Nicholas Fyffe, have had a hugely successful fall season of showing in Wellington, Florida. All of the quality rides and scores achieved this fall have made the team confident of an action-packed winter season of showing at the upcoming 2018 Adequan® Global Dressage Festival (AGDF).

In their most recent competition outing, the team collected numerous blue ribbons and additional top placings at the Gold Coast Fall Fling show held at the AGDF showgrounds. Marcus rode Sasha Cutter’s Illuster Van De Kampert to a win in the competitive Prix St. Georges class, earning an impressive score of over 78 percent. Fyffe finished in a close second behind Marcus, riding Louise Cote’s Hitchcock to a score nearing 78 percent.

Marcus continued his success at the Gold Coast Fall Fling, piloting Cutter’s Quebec Bertling to first place in both of the Fourth Level tests and Da Vinci, also owned by Cutter, to first in the First Level tests with scores up to 73 percent. Later in the weekend, Illuster Van De Kampert again proved his talents and consistency by claiming first in the Prix St. Georges class with a score over 76 percent. Fyffe rode Hitchcock to another successful finish, winning the FEI Test of Choice class in the Prix St. Georges with a score over 72 percent.

Recently, the MFD team earned multiple blue ribbons and high scores at the Wellington Classic’s Global Holiday Challenge. Marcus topped his First Level class with a 74.8 percent on Da Vinci as well as the Fourth Level class on Quebec Bertling with a 69.5 percent, and both horses are owned by Sasha Cutter. Fyffe rode Louise Cote’s Hitchcock to the win in the Prix St. Georges with a 68.3 percent.

Numerous Marcus Fyffe Dressage students also rode down centerline, securing great performances to help them prepare for the 2018 season of showing at the world-renowned eight-week AGDF. With the recent arrival of additional talented horses to their string, as well as several eager students, Marcus Fyffe Dressage is focused on continuing and refining their team’s competitive edge.

“It’s exciting because I believe we’re going to have a successful year with our top up-and-coming U25 riders as well as getting to compete on our new horses,” Marcus said. “With it being a World Equestrian Games year, it will be exciting to bring our young Grand Prix horses out and measure how they stack up against the competition.”

The pair are thrilled to add Salinas, a 6-year-old by Soliman De Hus, to their roster of talented prospects as well as Dean Martin, a 9-year-old by DiMaggio. After spending time getting to know both of the geldings since they were imported from Europe, they are confident they will develop into their next upper-level mounts.

In addition, Fyffe is looking forward to competing his 9-year-old PRE stallion Fiero HGF, who he has brought up through the levels to Grand Prix. He anticipates the young talent will compete in CDI competitions this winter.

“I’m enjoying riding Fiero every day,” Fyffe said. “I’ve had him since he was 3. Whether I’m just hacking him at home or I’m cantering down centerline in a Grand Prix, it makes my day. That’s why I do this sport every day, so I can enjoy those magical moments.”

In addition to his heavy competition schedule this fall, Marcus dedicated time to host a clinic at Iron Rock Dressage in Fairfield, California, early in October, where he was received with positive feedback. In addition, Fyffe enjoyed traveling to Hickory Corner, Michigan, to lead a two-day clinic hosted by Andrea Landis Dressage, which also earned rave reviews from participants and auditors alike.

“Every year Marcus Fyffe Dressage becomes more established and the team garners more success and strength,” Fyffe explained. “In the last couple of years, the business focus has really been on cultivating a wonderful group of dedicated and talented clients and developing some really competitive younger riders in addition to our already seasoned riders. What I’m really looking forward to this year is that David and I will continue to develop these riders and their great partnerships, while also spending more time on our own competition horses.”

“We would like to thank everyone involved in making Marcus Fyffe Dressage so successful,” Marcus said. “We are looking forward to the New Year and are excited about all of our students. It’s going to be a memorable show year!”