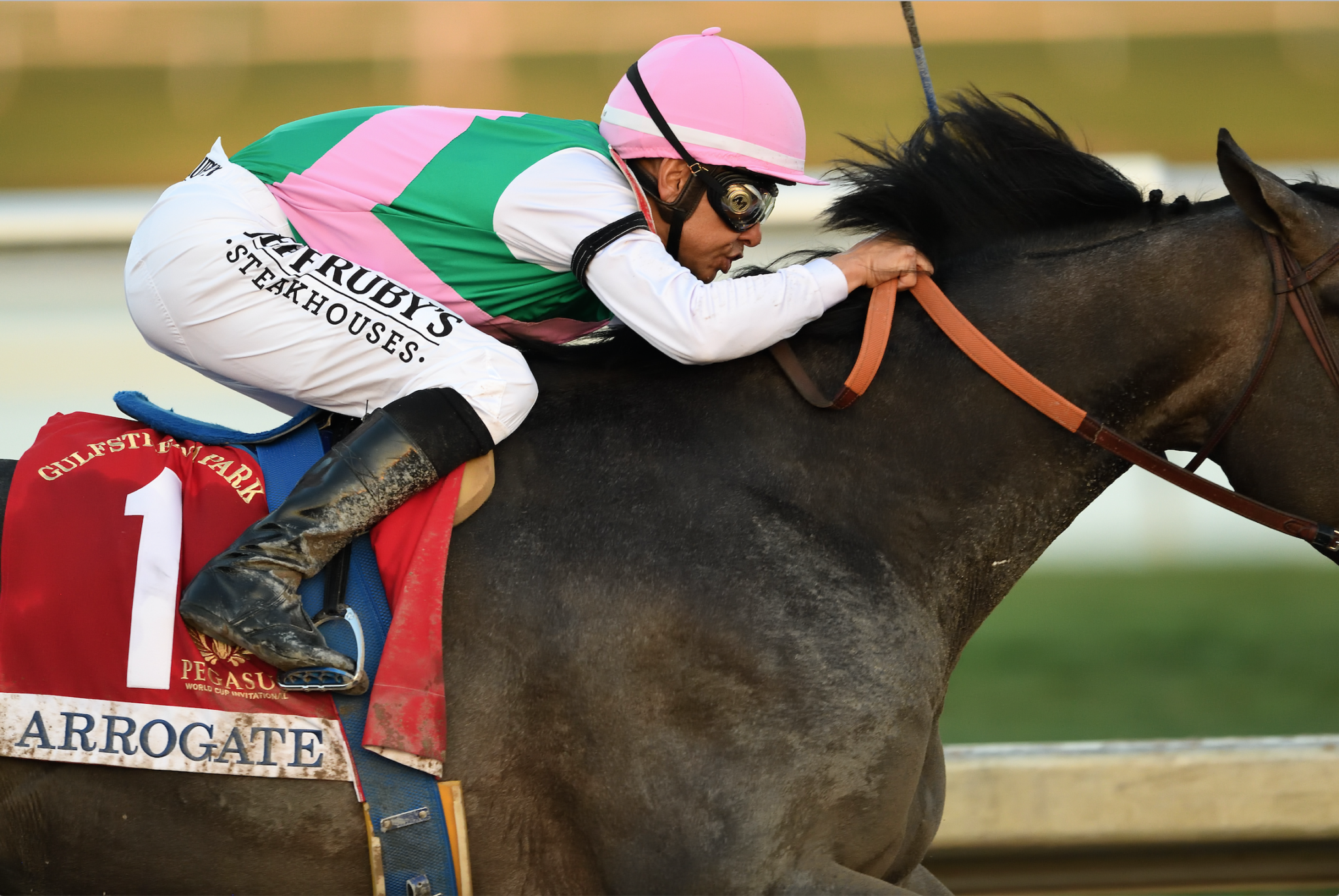 Gilbert, AZ – February 1, 2017 – American Equus racing irons were at the head of the pack with jockey Mike Smith and his mount Arrogate during the Pegasus World Cup Invitational at Gulfstream Park in Florida over the weekend. Smith and Arrogate bested a field of twelve horses, including two-time horse of the year; California Chrome, and ultimately won the richest purse in horse racing, a cool $12 million dollars. American Equus has worked directly with Smith help develop a stirrup [The Thoroughbred Teardrop Pro] that fits his riding style and is exhilarated by his success on the impressive grey gelding.

“We are so thrilled with Mike’s victory,” said David Shano, founder and president of American Equus. “We worked very closely with Mike to develop the perfect footbed for his riding technique and to be on his saddles with those very irons is truly gratifying.”

American Equus’ revolutionary irons are perfect for the sport of Thoroughbred racing. Each pair of stirrups is meticulously crafted out of a solid, light-weight billet aluminum alloy, providing extreme lateral crush strength, for the ultimate in jockey safety. The hand polished finish adds a professional look to the products that are of unparalleled performance and design.

“One of the most gratifying things about watching Mike win was that we had come up with the footbed design together and his successful performance in a race of this caliber solidifies our design,” said Shano.

Inducted into the National Museum of Racing Hall of Fame in 2003, Mike Smith has been a top jockey in American horse racing since the 1990’s. Smith has won all of the Triple Crown races individually and has more Breeder’s Cup Championship wins to his name than any other jockey in the history of the sport. His most recent win in the Pegasus World Cup Invitational only solidifies his position as one of the most respected jockeys in the sport.

“I love the way my foot feels in the American Equus Irons,” said Smith. “When I am up on them during the race, it almost feels like I am standing on the floor, which is such an improvement from a traditional iron”

American Equus unique foot bed design incorporates technology that helps the rider maintain balance as well as keep their foot secure in the stirrup, which proved to be an integral part of Smith’s when breaking from the gate and his safety during the race.

“It was so important in this race to make a strong break from the gate- ‘booting and scooting’ we call it and it was in those moments that I really appreciated having the stirrups.”

With the historic win of the first Pegasus World Cup Invitational behind him, Smith is looking ahead to potentially racing Arrogate again in the Dubai World Cup and getting another crop of young horses ready to compete in the Kentucky Derby and Kentucky Oaks events.

American Equus, is proud to sponsor talented and professional athletes like Smith and is looking forward to many more successful races on his saddle.

To learn more about American Equus and their complete line of stirrups for all equestrian disciplines, please click here.

To learn more about Mike Smith and his legendary career, please click here.